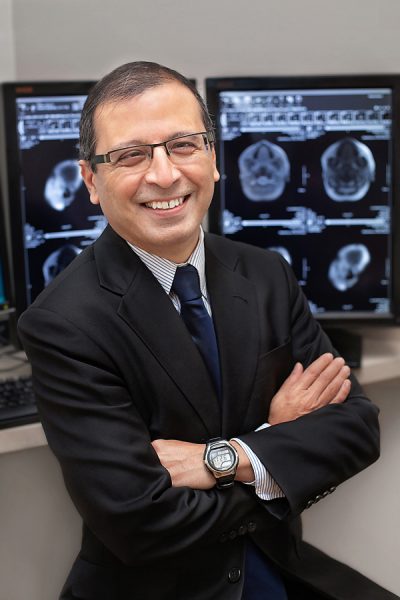 Background
Many patients with essential tremor (ET) get relief with medications. However, some patients, despite trying multiple medications, have a disabling tremor affecting activities such as eating, writing or using tools. Severe tremor also leads to social embarrassment and isolation. Surgical options can significantly improve quality of life in such patients.

Surgical treatment for ET goes back many decades. Abnormal circuits in a deep brain structure called the thalamus misfire sending signals to the muscles causing a tremor. In the 1970s, Irving Cooper, a neurosurgeon from Columbia University in New York, introduced the idea of making a lesion (similar to a small stroke) in the thalamus to suppress these tremor circuits. However, long term experience shows tremor relief from this method called thalamotomy may wear off in a few years. Patients with tremor in both hands need a thalamotomy on both sides of the brain, leading to higher risk of complications including difficulty with speech compared with a lesion only on one side.

The Birth of DBS
To find the best target the patient undergoes brain mapping while awake. The area within the thalamus is given a test dose of electrical stimulation to see if the tremor subsides. Alim Benabid, a neurosurgeon from Grenoble in France, realized stimulation on a constant basis could provide long-term control of tremor. He developed a brain pacemaker connected to a wire in the brain targeting the thalamus and the idea of deep brain stimulation (DBS) was born. This is the most established surgical technique for control of tremor. DBS was approved by the FDA in 1997 for ET and is covered by Medicare and many private insurers for appropriate patients.

DBS has the advantage of not requiring a stroke-like lesion in the brain. Unlike with a misplaced thalamotomy, side effects can usually be reversed by turning the pacemaker off. Both sides of the brain can be targeted without inducing the kind of complications seen when thalamotomy is done on both sides. DBS settings can be gradually increased over the years if the tremor gets worse. The battery for the DBS pacemaker requires replacement every three to five years. It must be kept in mind that there is approximately a two percent risk of a brain bleed with initial electrode placement.

DBS results depend on accurate placement of the electrode. New types of electrodes allow electrical stimulus to be directed in different directions. These directional electrodes allow for good tremor control while minimizing side effects even without perfect placement. DBS technology continues to improve with directional electrodes, smaller and longer lasting pacemakers, and rechargeable batteries being some of the innovations.

MRI-Focused Ultrasound
MRI-Focused Ultrasound (MRI-FUS) is the most recent surgical option. High energy ultrasound waves are targeted to the thalamus with high-quality MRI imaging. The ultrasound beam makes a lesion like a thalamotomy. The procedure is done on an awake patient in an MRI suite. A lighter test dose is applied to see if tremor improves. If there are no side effects, a full intensity dose is applied. MRI-FUS does not require a burr hole in the skull or electrodes and pacemakers within the body. In this sense, it is “noninvasive,” but a misplaced lesion can still result in permanent side effects. Small numbers of patients with ET have undergone this procedure, usually with favorable results. How these patients will fare in the longer term remains to be seen.

Surgical option choices for severe tremor should be made under the guidance of a movement disorders neurologist highly experienced with these procedures.