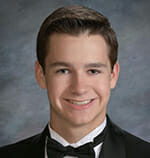 Like many other people with essential tremor, Colin struggles with everyday tasks that most people take for granted including writing, pouring milk and speaking.

As he has grown older, he has learned to modify or make substitutions to accommodate his shaking hands. When it affected his ability to play the trumpet, but he began playing the piano instead. He spent hours practicing to build up the muscle memory in his hands before performances. When he auditioned to be a commencement speaker, he asked to sit to deliver his speech because there was no podium to provide support for his shaking hands. He was not chosen as a speaker, but he followed up with a letter to the committee about the importance of providing accommodations for all students.

He is a student at the University of California Berkeley. He serves on the Blackwell Hall Association Executive Committee, responsible for hall activities and events. He received the Cal Alumni Association Leadership Award in 2019 and is a Berkeley CRU community volunteer